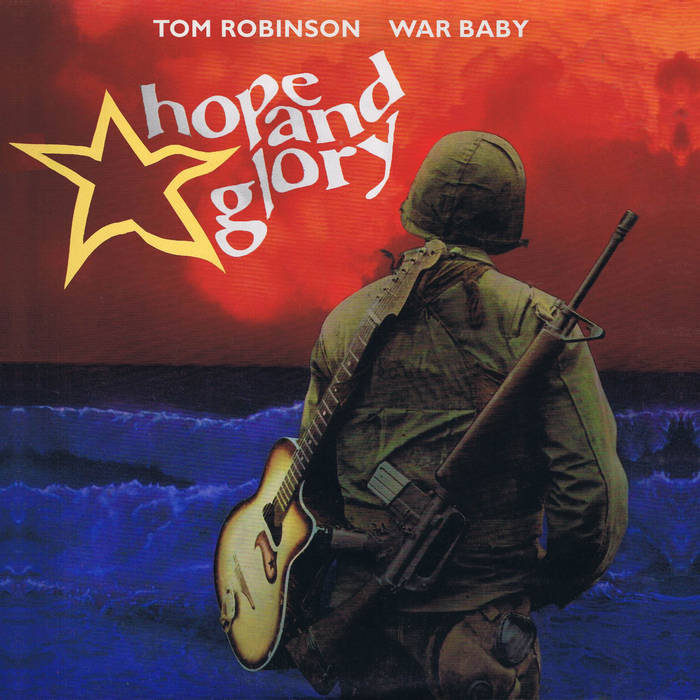 Richard Hayward So much atmosphere conveyed by so few words. This track truly lives up to its title and not only that - this version features Steve Laurie and Pat Davey - two old muso friends from the eighties. Favorite track: Atmospherics: Listen To The Radio.

chickenboy55 Reminds me of my youth Favorite track: War Baby.

Kenneth Holmes Takes me back to my student days hi I loved the songs atmospherics and war baby. I think atmospherics is a classy, sultry and well written track. Love it and so glad to have found it again!!!
more...

an ugly dog or perhaps a chupacabra

This album - first released in 1984 as "Hope And Glory" - was a Top 40 hit in Europe, but despite glowing reviews its North American release on Geffen proved a non-starter. First, the original Vietnam-inspired cover was suppressed, then the album itself inexplicably pulled from the shops six weeks after release, and Tom was dropped from the label. This re-release of the album as "War Baby: Hope And Glory" is the first time it has been available on CD anywhere in the world.

War Baby, with its cryptic, elliptical lyrics, could have been written in 1974, 1984, 1994, or just about any time. It's one of those magical songs which seems to sit like an anchor while times and styles just flow around it - and hearing it still gives me shivers. As to what it's actually about, Tom Robinson himself couldn't tell you - he just wrote what "sounded right."

I too grew up living in the tail end of the cold war and find much of War Baby is recognisable and familiar in its cold war themes and allusions. Those references also take on additional, deeply personal meanings - mistrust of one's partners and allies (and also oneself), weakness, vulnerability, fear of truth, of the future, of the present... The song is very human, very frail, and very honest - even without a specific meaning or recognisable storyline. Tom Robinson may not have human behaviour figured out any better than the rest of us - but he does know how to put words to that little voice inside our heads.

Many of the songs on this album will be familiar to longstanding Tom Robinson fans - though not necessarily in this form. Some are brought into vivid focus here by the remarkable arrangments - others seem to hide, only to be "rediscovered" at another time, in another form. The 1992 solo album "Living In A Boom Time" for instance featured more recent, acoustic recordings of several of these songs.

Seven bonus tracks have been added to the ten which made up the original album. There's the 1985 single of "Prison" produced by David Motion, plus various contemporary 'B' sides and out-takes. Outstanding among these is the alternate recording of "War Baby". Lost for years after the original 12" single was deleted, this version displays an even more haunting quality than the single we've grown to love. To slow down the tempo and strip away much of the instrumentation was a bold move - and the effect is stunning.

It's a delight to restore Hope and Glory to my collection. The distinctive sound of this album somehow defines a moment in time, and yet - like all great pop recordings - remains utterly timeless.

Sleeve by Rob O'Connor at Stylo Rouge
Photograph of TR by Paul Cox
Other photgraphic material provided by Nick Yates, Popperfoto and Colorific