Gilbert Hawker - Letter From The Front 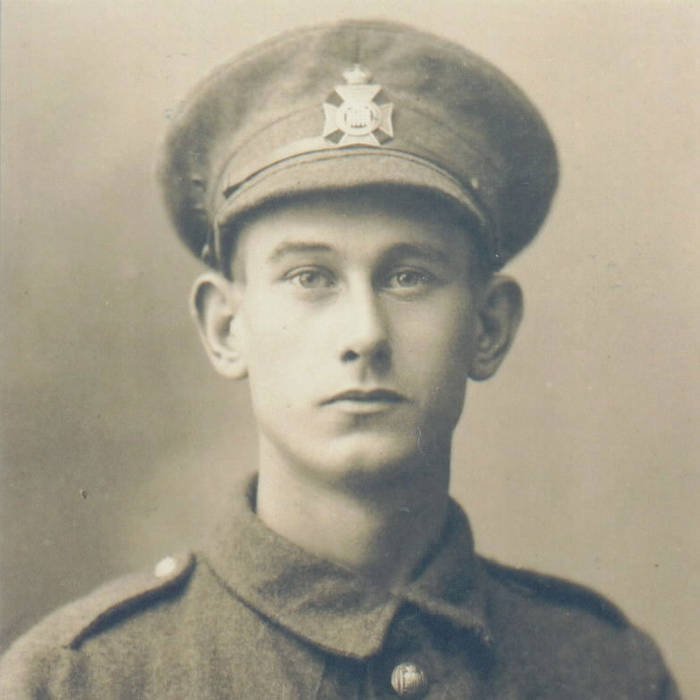 From "Private View" show, Edinburgh Fringe 1987
Gilbert E. Hawker, whom my grandmother May described as "a golden haired engineer and the joy of our year" was light-hearted, smiling and flirtatious. When he was fighting in France in 1915 May sent him by way of comforts for the troops a pair of socks she had knitted and a slab of home-made toffee. Later, on a visit to Flanders after the war, Hawker's name was the first that caught her eye on the Menen Gate momorial to men with no known grave. My grandfather once showed me a photograph of the college football team and said that none but he had survived. This is Hawker's letter, written on cheap lined letter paper. It is undated, but was sent from somewhere on the Western front in 1915, the year of his death.

My Dear May,
I am attempting to answer your epistle of loving cheer under somewhat trying circumstances. I am sitting next to a rather warm stove in a dark corner of a typical Flemish estaminet. The company talks Flemish, French and English, and are kicking up an awful row. A young lady of ample proportions is ironing sundry domestic garments on my right side, six Life Guards are blessing the service to my front and my friend is chattering vile French on my left flank. All over pervades the odour and noise of two small children and a dog. The usual glass of watery beer is at mine elbow so here's to the fair May.

I have now gulped half a pint of water and a thimbleful of beer to you. The atmosphere is stifling hot and I can't see the lines I'm supposed to write on, but being a soldier I'll stick to my post and hope you can figure out the script. May, I'm simply awfully bucked to hear from you. The people from the college have all turned out aces and I absolutely love the place since it was my last link with the civilised world. The stout lady has just lit a vilely malodorous lamp so I'll manage better by its dim light. The socks were charming and you must be a hero to have stuck through the monotonous period of knitting 'em. I washed my tootsies: the socks' arrival coincided with my monthly ablutions and I put 'em on, and never felt better in my life. Considering what came with them I shall never part with them so long as this noble heart still works its revs per min. as usual.

Of course, I'm a real veteran by now, and when you've buried pals by night in a bleak rain under fire and picked up bits of chaps, there ain't such a thing as horror. It's called sport by the boys who won't be killed. The fellows never get very excited about this because they're in it, and Lord knows they may cart the corpse of G.E.H. to a convenient hedge some dark night. The toffee was really excellent, 'cause they can't make toffee here, they're all such mercenary idiots. The thing that does really worry us is this: who is looking after all the dear girls while we're away? It haunts me day and night and spoils my appetite. Freda, like the brick she is, writes and keeps me alive occasionally. And now, May, I cannot hear myself write for the row and other things so au revoir, and for thy fair sake I'll keep under the barricade. Accept the heartiest thanks and best wishes from your old friend.